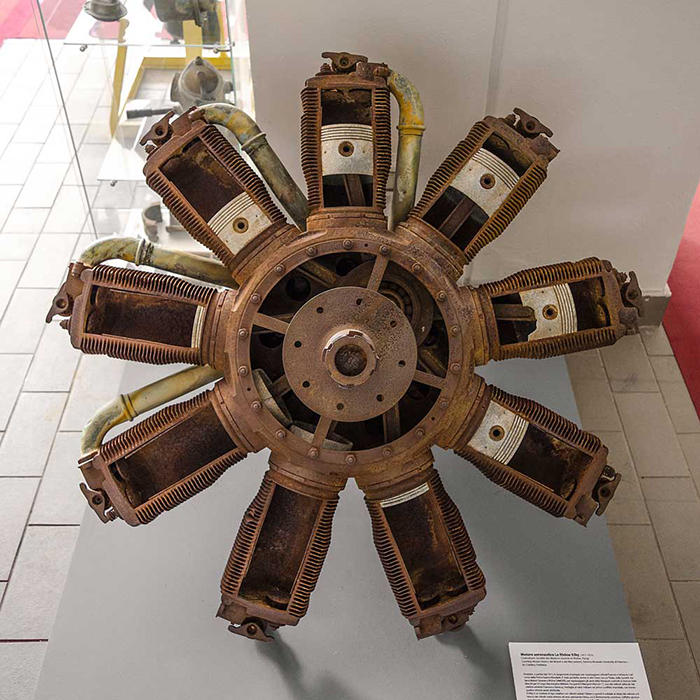 The aircraft engine Le Rhône Type J, produced by the French company Société des Moteurs Gnome et Rhône, has been widely used, since 1914, in numerous French and British aircrafts during the First World War. The same engine was produced under license in other countries: in Italy by the Italian Gnome Motors Company and Rhône (SIMGER) in Turin to equip Nieuport aircrafts built under license by Macchi for the Italian Air Force Corps. Until the end of the First World War the engine was subject to continuous development, with various upgraded models; the last and most powerful one was the Type J By, equipped with aluminium pistons. The engine is of rotary type with radial cylinders: the crankshaft is fixed to the chassis of the aircraft and the cylinder block rotates around it togheter with the propeller. This scheme, introduced in the aviationl field in 1907 by the French brothers Luis and Laurent Seguin with the Gnôme Omega engine, was widely used from 1908 to 1918 by many manufacturers. It allowed to solve various matters of the early aircraft engines (above all ensuring a proper cooling effect) but, at the end of the First World War it resulted outdated by the development of other "conventional" engine designs.