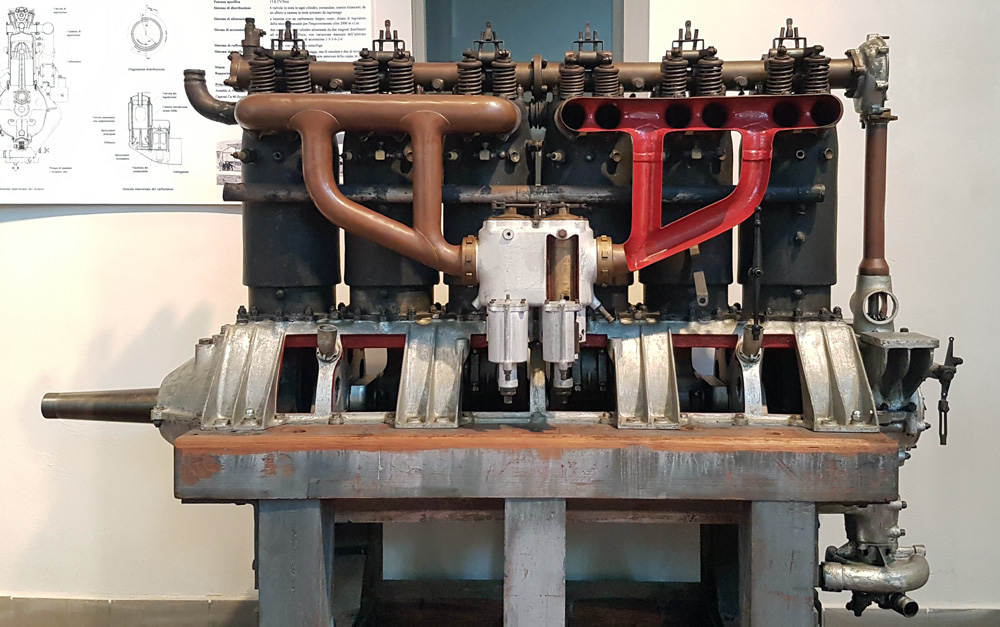 During the First World War, the aeronautic sector went through a rapid development dictated by the pressing demand for aircrafts and engines with higher performances. In Italy, one of the most important manufacturer was FIAT, which started the autonomous production of both aircrafts and engines since the 1910s. The FIAT A 12 bis engine was developed in 1917 as an evolution of the A 12 model, in order to improve its overall performance and technical qualities. The engine has the typical technical features of liquid-cooled engines used in aviation during that period, deriving from a constructive arrangement introduced by Mercedes. Cylinders and heads were made of steel with thin-walled weld-steel cooling jackets; the parts of the valve timing system were enclosed in a carter that ensured the correct lubrication. This allowed to contain the total mass of the engine, obtaining a good reliability and a certain simplification in the production process. Furthermore, various modifications could be easily introduced quickly, without substantial changes in the general layout.The engine, produced in large series (over 12000 examples) since 1917, was considered one of the best in its class and it was used, in the early '20s, in numerous aircrafts in Italy as well as in French and Russia. In Great Britain it was sold at a higher price than some engines produced by other well-known manufacturers and at the same price as the Rolls Royce Eagle, one of the most powerful of that period. After the war, some FIAT A 12 bis were also used in motorsport. With some modifications, an example was used to equip the Fiat SB4 Mefistofele record-breaking car, built and led by the British pilot Ernest Eldridge, who reached the world speed record at 234.97 km/h in 1924. Similarly, another FIAT A 12 bis was used for the record-breaking Botafogo Special car, built by Argentine pilot Adolfo Scandroglio.